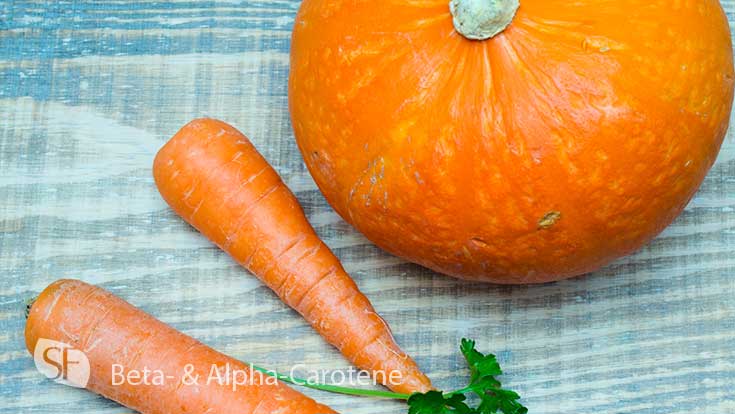 Beta-carotene first came to attention in the 1980s, and it’s one of the world’s most studied antioxidants. The word “carotenoid” comes from the yellow-orange color of these nutrients, which at first were linked primarily with carrots (which is where the name comes from). Carrots contain rich amounts of beta-carotene, and it’s abundant in other fruits and vegetables like sweet potatoes and pumpkins.

We’ve long known that the beta-carotene in foods helps prevent many diseases, including lung cancer. It was the connection between beta-carotene and lung-cancer prevention that led to some fascinating studies. These groundbreaking studies on beta-carotene were among the first indications that supplements were not the total answer in preventing disease and, indeed, it’s this finding that’s at the heart of SuperFoods: Whole foods are the answer to disease prevention and health promotion.

Perhaps you recall those studies. They made front-page news around the world:

• In 1996, a Finnish study on 29,000 male smokers, published in the New England Journal of Medicine, showed that those who smoked and took beta-carotene supplements were 18 percent more likely to develop lung cancer than those who had not taken supplements.

• In the United States, the Carotene and Retinal Efficacy Trial (CARET) study, which was published in the Journal of the National Cancer Institute, was halted almost two years before expected completion because of the negative effects of the supplemental beta-carotene and vitamin A on smokers when compared with subjects taking a placebo.

The news of the surprising outcomes was stunning to those who follow health trends. They had become accustomed to regular positive reports that individual micronutrients help to prevent disease. What went wrong? In simplest terms, the beta-carotene found in foods, working synergistically with the other nutrients present in that food, have a very different effect on the body than a single nutrient isolated from its web of assisting and augmenting synergistic partners. The carotenoids, like many nutrients, work best as a team; break up the team and results can be unpredictable.

When derived from whole foods like pumpkin, the carotenoids are major players in the fight against disease. Higher blood levels of beta-carotene and alpha-carotene are associated with lower levels of certain chronic diseases. In laboratory studies, beta-carotene has been shown to have very powerful antioxidant and anti-inflammatory properties. It prevents the oxidation of cholesterol in laboratory studies, and since oxidized cholesterol is the type that builds up in blood vessel walls and contributes to the risk of heart attack and stroke, getting extra beta-carotene in the diet may help to prevent the progression of atherosclerosis and heart disease.

Beta-carotene along with other carotenoids may also prove to be helpful in preventing the free radical-caused complications of long-term diabetes and the increased risk for cardiovascular disease associated with this common illness.

Studies have also shown that a good intake of beta-carotene can help reduce the risk of colon cancer, possibly by protecting colon cells from the damaging effects of cancer-causing chemicals.

While beta-carotene has long been linked with health promotion, it’s the bounty of alpha-carotene in fruits like pumpkin that makes it a real nutritional standout. The exciting news about alpha-carotene is that its presence in the body along with other key nutrients is reportedly inversely related to biological aging. In other words, the more alpha-carotene you eat, the slower your body shows signs of age. Not only may alpha-carotene slow down the aging process, it also has been shown to protect against various cancers and cataracts. Moreover, the combination of carotenoids, potassium, magnesium and folate offers protection against cardiovascular disease.

So go ahead — eat that carrot and pumpkin. You’ll be doing yourself a world of good.