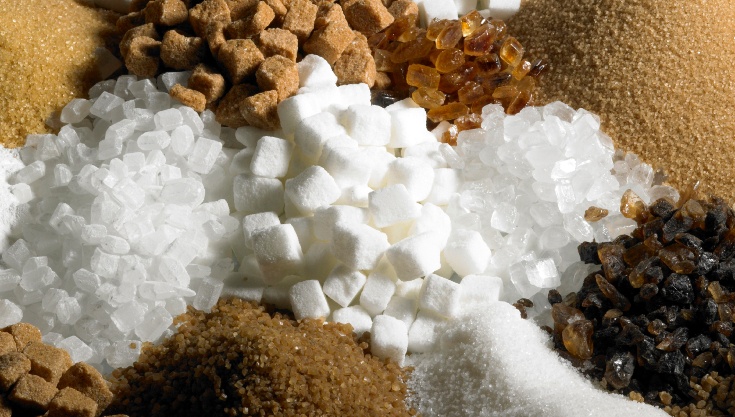 You’re tired of sugar’s empty calories and feeling hyper before crashing. You decide it’s just not worth enjoying that sweet flavor for a few fleeting moments, and, besides, you’d like to keep your teeth well into old age.

But just as you’re ready to break the vicious cycle with that darn sweet tooth, we’re here to tell you that you’ve been fooled by manufacturers with a list of crazy names you would never have guessed were the same thing as sugar. 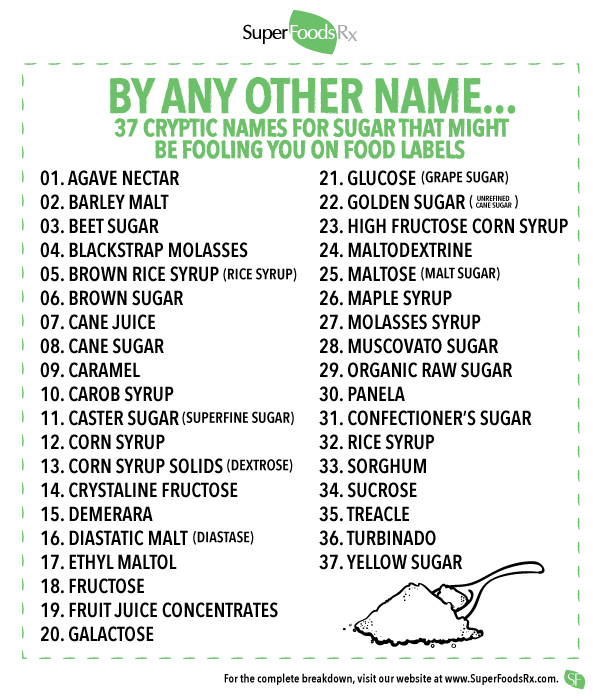 So get ready to whip out this list at the supermarket to check the tiny labels, because the manufacturers aren’t going to make this detective work easy for you. These are the cryptic names for sugar on food labels:

Agave Nectar (or Agave Syrup): This stuff is hailed as a cure-all for obese and diabetic people, but it’s still sugar. It’s actually sweeter than sugar so people often use less, but this stuff is concentrated, even more than high-fructose syrup.

Barley Malt: Yes, it almost sounds like a vegetable, but it’s actually plain old sugar, just grain based. It’s not as sweet as white sugar but it causes the same spikes in blood sugar. You will often find barley malt in cereals and beer. Yes, beer has sugar.

Beet Sugar: Another vegetable-derived sugar, this one also boasts being refined from mostly GMO grown beets (you won’t find this information on labels, because the FDA does not yet require labeling genetically modified foods).

Blackstrap Molasses: There are two kinds of blackstrap molasses, sulfured and unsulfured. The unsulfured variety actually has some benefits: it’s high in antioxidants, folate, iron and calcium. The sulfured variety, however, has all the empty calories of regular old sugar. The main problem here is that you can’t tell from a label which kind of molasses it is, so it’s probably best to avoid it.

Brown Rice Syrup (aka Rice Syrup or Rice Malt): The frightening part about this sugar is that it introduces arsenic into your diet. Not enough to poison you to death, but the FDA states that long-term exposure to arsenic is associated with higher rates of cancer.

Brown Sugar: There’s no real nutritional difference between brown and white sugars (unlike rice). The only difference is a slight variation in taste.

Cane Juice, Evaporated Cane Juice and Cane Juice Crystals: They sound wholesome but this stuff is no different from refined white sugar, so don’t be fooled.

Cane Sugar: It’s just plain old sugar! In fact about 80% of the world’s sugar is derived from sugar canes.

Caramel: This is just caramelized sugar, which is a fancy way of saying it’s sugar that’s been heated.

Carob Syrup: Carob, as many already know, is often eaten as a chocolate substitute and is rather high in protein and nutrients. Carob syrup, however, is stripped of any benefit and is just plain old sugar as far as your body is concerned.

Caster Sugar (aka Superfine Sugar): This stuff is regular sugar only granulated to finer crystals.

Corn Syrup: While not as bad as high fructose corn syrup, it’s still pretty terrible. You can get your fix of it in many fast foods.

Corn Syrup Solids (aka Dextrose): This is just as bad as high fructose corn syrup. It’s also what you usually find in most coffee creamers.

Crystalline Fructose: This stuff is used in fruit flavoring so beware. It’s also linked with hyperlipidemia (high levels of fats in the blood) and fatty liver disease.

Demerara: This is a larger-grain sugar than table sugar and has hints of caramel. Despite faint traces of protein, it’s just plain old sugar.

Diastatic Malt (aka Diastase): While this sweetener only has 2/3 the calories of regular sugar, it still acts as sugar. It’s a lesser of two evils.

Ethyl Maltol: It tastes and acts just like sugar.

Fructose: Yep, it’s sugar. It occurs naturally in fruits and honey, but you’ve got to be careful to keep your intake low.

Fruit Juice Concentrates: After stripping the fruit of pulp and it’s nutrients, you’re left with this: sugar!

Galactose: Derived naturally, this acts just like sugar and is often found in fast foods and dairy products.

Glucose (aka Grape Sugar): This is found in fruit and honey, which have nutrients. When you find this in baked goods, however, it’s usually not much different from refined sugar.

Maltodextrine: Basically, this is a sugar derived from corn, which doesn’t make it act any differently on the body than table sugar.

Maltose (aka Malt Sugar): This is less sweet than refined sugar but is just a lot of empty calories.

Maple Syrup: Less refined than sugar, but is lacking in nutrients and is full of empty calories.

Molasses Syrup: This sweetener has iron and calcium but it still acts as sugar.

Panela: This is a Latin American sugar made from evaporated cane sugar juice. It’s pure sugar.

Rice Syrup: Overall, it’s low on the glycemic index but is full of maltose (sugar).

Sorghum (and Sorghum Syrup): This is just sugar, except it’s got the benefits of fiber.

Sucrose: This is the name for the table sugar we use daily.

Treacle: This stuff is high in glucose, fructose and sucrose. Triple threat!

Turbinado: This is what you’re usually buying when you buy raw sugar. The bad news is that it’s no different to the body than white sugar.

Yellow Sugar: No different from white and brown sugar, it has the same sugar and carbs as both. Sorry!