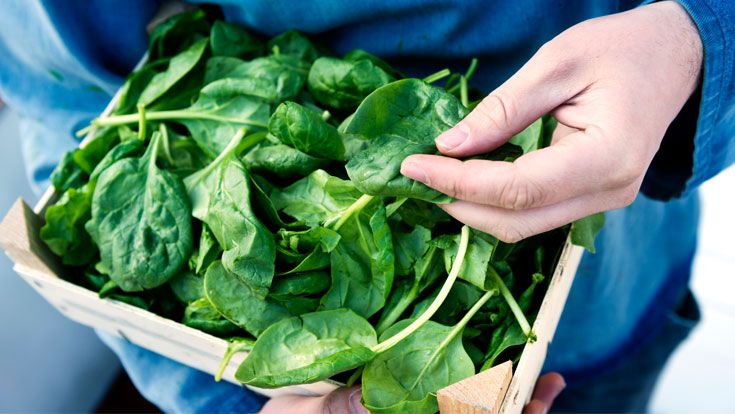 It’s not surprising that spinach is a powerful ally in the fight against cancer. A number of studies have shown an inverse relationship between spinach consumption and almost every type of cancer. Researchers believe that it’s the rich supply of vitamins, minerals, omega-3 fatty acids, antioxidants and phytonutrients that do the job. The folate in spinach also helps the body produce new cells while repairing DNA.

Spinach and its sidekicks also offer rich supplies of glutathione and alpha lipoic acid – two critical antioxidants. These substances are manufactured in the body but as we age our ability to produce them subsides. That’s when spinach health benefits can make an important contribution with its ready-made supply of both glutathione and alpha lipoic acid.

In addition to these to antioxidants, spinach supplies the carotenoids lutein/zeaxanthin and beta-carotene that play an important role in our body’s anti-cancer defense systems. These carotenoids remove unstable molecules called free radicals from your body before they damage it. They’re found in spinach and other dark green leafy vegetables, and some studies show they could protect against cancer of the mouth, esophagus, and stomach.

You’ll get the most lutein from raw or lightly cooked spinach. Enjoy it in a salad, steamed, or sautéed with garlic and extra virgin olive oil, or stirred into soups.

Check out all of the delicious ways you can get spinach in our Recipes section.