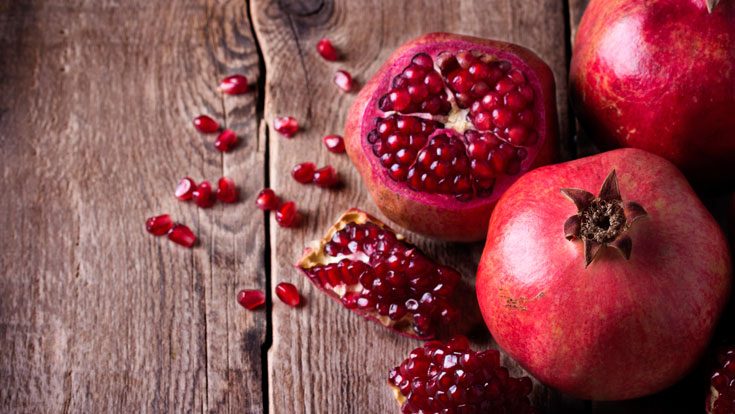 Did you know that it may have been a pomegranate – not an apple – that tempted Eve in the Garden of Eden? The beloved pomegranate figures prominently in history and mythology. The art, literature and culinary traditions of Europe, the Middle East, Africa and India all revere the mighty garnet colored jewel. This fruit has been around since ancient times, and pomegranate health benefits have also long been recognized.

A study in autumn colors, pomegranates can range from yellow-orange and red to deep purple. Rich in potassium, vitamin C, polyphenols and vitamin B6, pomegranates are real phytochemical powerhouses. Pomegranate juice may also have two to three times the antioxidant power of equal amounts of green tea or red wine. In one study published in the American Journal of Clinical Nutrition, pomegranate juice was a potent fighter in the battle against atherosclerosis. As little as ¼ cup of pomegranate juice daily may improve cardiovascular health by reducing oxidation of LDL (“bad”) cholesterol. It’s unfortunate that many of us avoid pomegranates because it takes some work to get to the seeds.

Pomegranates possess potent anti-inflammatory phytochemicals, and consumption of pomegranate juice has been shown to lower blood pressure in hypertensive volunteers. Studies of several fruit juices and wines have reported the highest polyphenols concentration in pomegranate juice followed by red wine and cranberry juice.

If you’ve never tried a pomegranate, autumn is the perfect time. Select a pomegranate by weight: the seeds represent about half the weight of the fruit, so the heavier the fruit the better. The skin should be shiny without any cracks. You can store your pomegranate in a cool place for about a month but it will keep in the refrigerator for up to two months.

Try pomegranate juice mixed with seltzer and a slice of lemon or lime for a wonderful sipping drink. It will give you a powerful antioxidant boost as you enjoy the delightful flavor and color.

People seldom consider this, but using pomegranate juice for sauces, vinaigrettes and marinades is a great option. You can use the whole seeds in salads and desserts or as a garnish for savory dishes of meat or fish. To get to the seeds, cut the top of the fruit and cut the rind vertically (from top to bottom) in about four places. Then put the fruit in a bowl of water or a clean water-filled sink. Peel away the sections of the fruit, releasing the seeds from the bitter white membrane. The seeds will sink to the bottom of the water and the remaining part of the fruit will float. Skim off and discard the floating bits and pour the seeds into a colander to rinse them off.

You can then use the seeds in a recipe or put them in a blender or food processor to make juice. If you freeze the seeds first, they’ll yield more juice. Each medium fruit yields about a half cup of pomegranate juice. 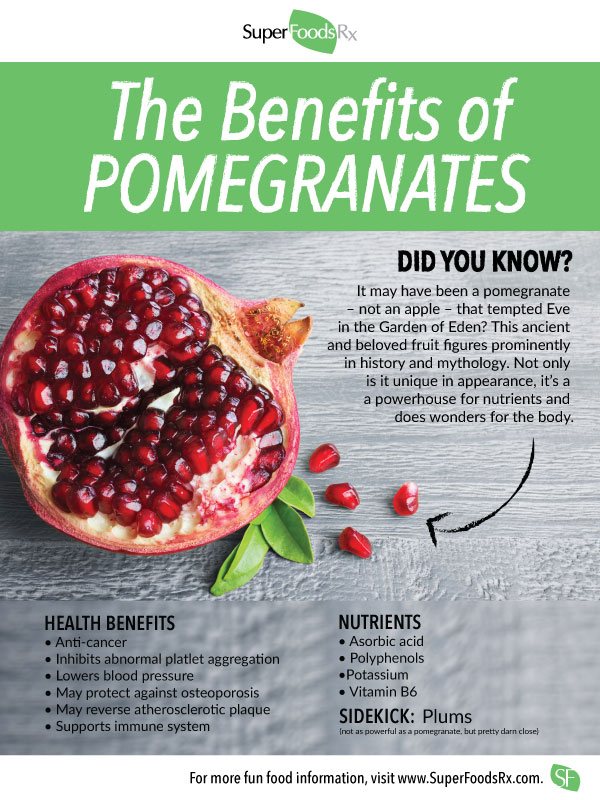