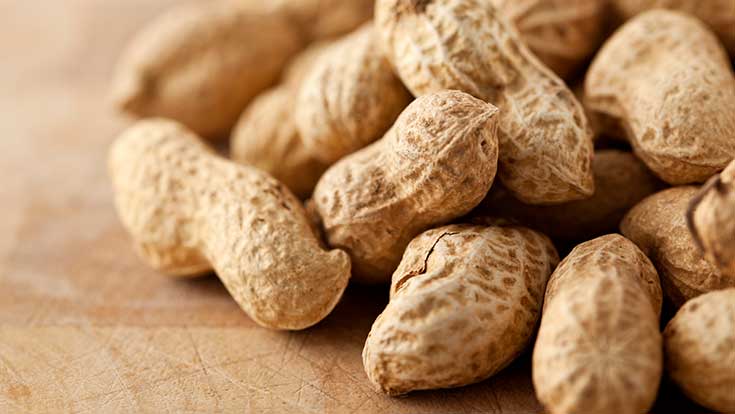 If you ever wondered why nuts are good for you, here’s a list of their beneficial components. If you ever wondered, “are peanuts good for you?” you’ll soon be smiling. And if you’re on a budget and can’t afford the more expensive nuts, know that peanuts have been found to have most, if not all, the same benefits as walnuts, almonds, pistachios or macadamia nuts.

Polyphenols: A handful of walnuts has significantly more polyphenols than a glass of apple juice or even a glass of red wine. In one study, a serving of shelled walnuts (14 halves) had the polyphenol content of 2.2 servings of red wine.
Magnesium:  Magnesium decreases heart arrhythmia and helps prevent hypertension. It’s also critical for normal muscle relaxation, nerve impulse transmission, carbohydrate metabolism and maintaining healthy tooth enamel. Low magnesium intake is also a risk factor for migraine headaches. Almost half of patients who suffer from migraines have magnesium levels that are below normal. Magnesium is abundant in most nuts.
Reversatrol: This flavonoid, which is found abundantly in grape skins as well as peanut skins, has anticancer properties. It is also an anti-inflammatory and has been associated with helping to maintain healthy cholesterol levels.
Ellagic Acid: This polyphenol is found in high concentrations in nuts, particularly walnuts. Animal research studies have demonstrated that ellagic acid is beneficial in the prevention of cancer by affecting both the activation and detoxification of potential carcinogens.

Adding to this is an informative article about the benefits of peanuts from our news partner, Reuters.

Peanuts May Lower Risk of Death from Heart Disease

(Reuters Health) – Peanuts may reduce the risk of death from heart disease, a large study found, suggesting that the health benefits of this low-cost nut may be similar to pricier options like almonds and pistachios.

While previous studies have linked nut consumption to a lower risk of heart disease, diabetes, and high blood pressure, the earlier research focused mostly on wealthier white people in the U.S. and Europe. This study, with a more ethnically and economically diverse population in the U.S. and China, suggests that nuts can benefit people from a wide variety of backgrounds.

“We can now tell people that peanuts are just as good as more expensive tree nuts, and that the benefit isn’t just for white, upper class people, it’s for everybody,” said senior study author Dr. Xiao-Ou Shu, a professor of epidemiology at Vanderbilt University School of Medicine in Nashville, in a phone interview.

Shu’s team studied 71,764 people in the southeastern U.S. – mostly low-income, and about two-thirds African-American – and 134,265 residents of Shanghai.

They looked at how many grams of peanuts (including peanut butter) and other nuts participants ate on an average day and sorted them into five groups ranging from a low of less than 0.95 grams to a high of at least 18.45 grams.

A peanut – which is technically not a nut (it’s a legume) – weighs about one gram, and there are about 28 peanuts in a one ounce serving.

The Chinese participants ate far fewer nuts than the Americans, and in both countries women generally ate less than men. Average daily nut consumption ranged from a low of 1.6 grams for Chinese women to a high of 16.4 grams for white men in the U.S. south.

Peanut butter didn’t curb the risk of death, however, possibly because it contained sugar or hydrogenated fat “or some other added ingredients that nullified the benefit,” said Dr. David Maron, director of preventive cardiology at Stanford University School of Medicine, who wasn’t involved in the study.

Natural peanut butter, which has no added ingredients, might be just as beneficial as peanuts, Maron said in a phone interview.

The study didn’t randomly compare peanut eaters to people who don’t eat peanuts, which is the gold standard method for proving a benefit. An observational study like this can’t prove that eating peanuts caused people to live longer. Still, the results, added to findings from previous research, make a compelling argument for including nuts in a healthy diet, said Dr. Mitchell Katz, director of the Los Angeles County Department of Health Services, who wrote a commentary published with the study in JAMA Internal Medicine.

“Because most of the previous research was done on people of high socioeconomic status, there has been an assumption that maybe people who eat nuts are also doing other things that might help them live longer, like exercising more or following a healthier diet,” Katz told Reuters Health by phone. “This study tells us that the nuts are beneficial, and it’s not just because of the type of people who eat the nuts.”

Dietary guidelines emphasizing low-fat foods may have led some people to avoid nuts, even though the kind of fat in nuts is healthy, said Dr. Ethan Weiss of the Cardiovascular Research Institute at the University of California, San Francisco, who wasn’t involved in the study.

“We have forever been told not to eat nuts because (they’re) fatty and high in calories, but that is getting blown up,” Weiss said by phone. “It now turns out that it is really good for you to eat nuts and peanuts.”