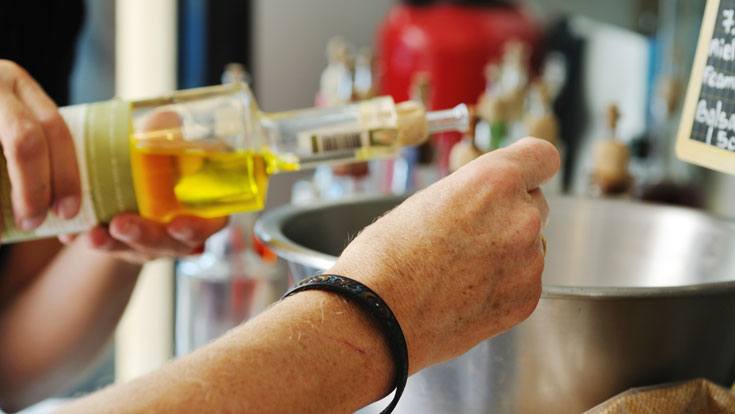 Of course, this would mean an increase in fruit and vegetable intake as well as the consumption of olive oil as a main source of fat. While we don’t know exactly what it is in extra virgin olive oil that provides protection against cancer, we do know that once again it seems to be the synergy of whole foods.

There has also been great interest in the role of olive oil in the prevention of breast cancer in particular. The role of fat in women’s diet and its effect on breast cancer is controversial, and a number of studies have been published with conflicting findings. In case-control studies in Spain and Greece, consumption of olive oil has been shown to reduce the estimated relative risk of breast cancer. It seems that oleic acid, the monounsaturated fat found in olive oil, may have the ability to inhibit the growth of certain types of breast cancer cells by inhibiting a gene that stimulates their growth. Moreover, in animal studies, olive oil seems to have an anti-tumor effect.

There is evidence that olive oil can play a role in the prevention of colon cancer as well. In one study in Europe, olive oil consumption was negatively associated with the incidence of colorectal cancer. Evidence suggests that compounds, such as the phenolics in olive oil, act directly on the colon to reduce oxidative or free-radical damage. This reduction of free-radical damage ultimately has a chemoprotective result. There’s also evidence that substances in olive oil inhibit the formation of amines—cancer-causing compounds that form while cooking meat. This would indicate that a marinade of extra virgin olive oil may lessen cancer risk, as it would inhibit these cancer-promoting amines from forming in the first place.