Although there’s no proven dietary cause or cure for depression, a growing body of research indicates there may be a strong link between what you eat and how you feel.

Multiple studies showed that people whose regular diet was high in processed meat, sweets, fried food, refined cereals and high-fat dairy products were more likely to report symptoms of depression than those who ate a variety of fruits, vegetables and fish.

This may be due to the nutritional deficiencies that result from not consuming enough fruits and vegetables. Low levels of vitamin D, omega-3 fatty acids, and iron, among others, have been linked to depression, and consuming foods rich in these nutrients may aid in boosting your mood and help you feel better. 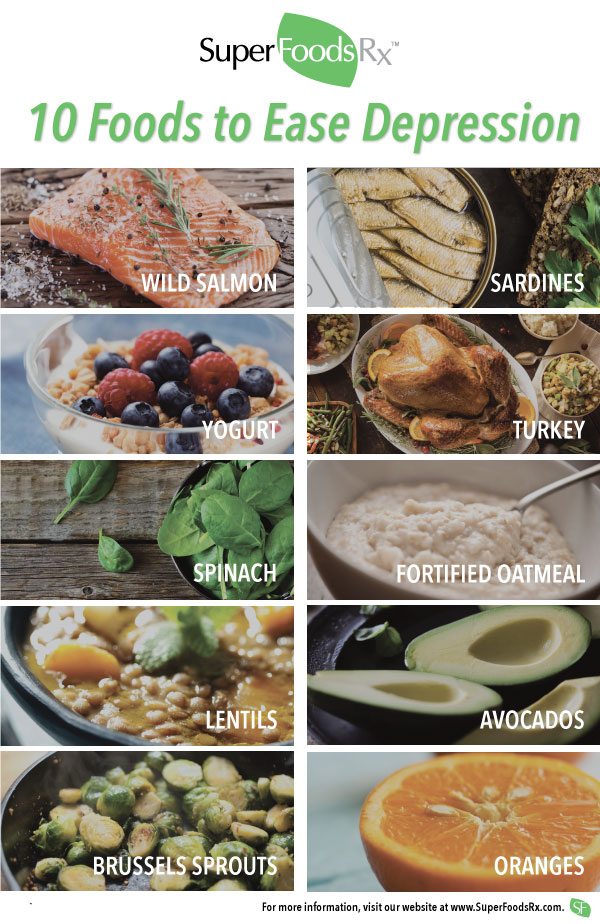 Nutrients and Foods to Improve Mood

Omega-3 Fatty Acids
Found in fish such as wild salmon, tuna, and sardines, omega-3 fatty acids play a critical role in brain function by reducing inflammation, and have been shown to contribute to lower rates of depression.

According to one study, societies that eat high amounts of omega-3 fatty acids have a much lower prevalence of major depressive disorder than those that consume little or none.

Other bodies of research have linked the infrequent consumption of fish in particular to higher rates of depression.

Vitamin D
Multiple studies link vitamin D deficiency to feelings of depression, including one that found the likelihood of the mental disorder is higher in people who don’t get a sufficient amount of the vitamin than those who do.

Additionally, a University of Toronto study found the condition of depressed people improved over time as the levels of vitamin D in their body increased. This was especially apparent in people with seasonal affective disorder — a type of depression that’s related to changes in seasons, and which begins and ends at about the same times every year.

Sources for vitamin D include superfoods salmon and fortified-yogurt, as well as tuna and even sunlight.

Iron
As a major player in transporting oxygen throughout the body, supporting energy levels and more, iron is critical in warding off feelings of depression.

People who are deficient in this mineral are likely to experience depression-like symptoms such as fatigue and apathy.

Iron can be found in superfoods like turkey, spinach and fortified oatmeal, as well as lentils.

Folate
Folate, also known as vitamin B9, plays a role in serotonin regulation, which in turn plays a major role in determining mood and regulating social behavior.

Those who don’t get enough folate in their diet are at risk of not only experiencing fatigue but also lower levels of serotonin.

Folate has also been known to boost the efficiency of antidepressants for those who are on medication, and many psychiatrists are now prescribing folate supplements as part of their treatment plans.

Good sources include SuperFoods like avocado, spinach, and oranges, as well as Brussels sprouts.