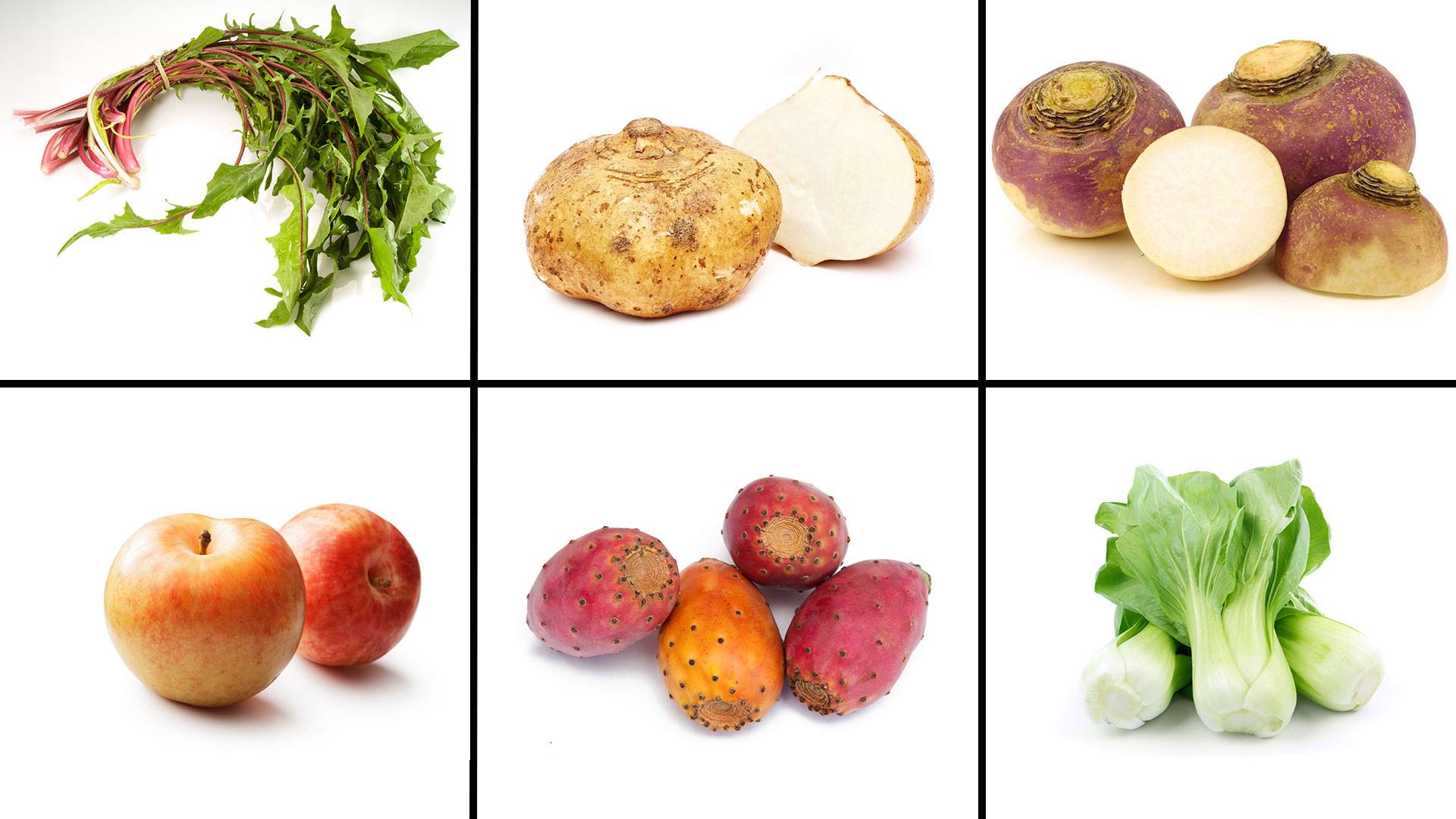 Your grocery store or farmer’s market is full of an incredible array of foods, flavors, and textures that are just waiting to be discovered. Even a typical grocery store has a produce section that carries seasonal and ethnic foods that often get passed-over, but are convenient, inexpensive, and yummy.

If you’re stuck in a rut of getting the same lettuce-tomato-onion-type foods that you always get, take a walk! Here are six plant-based foods I totally love that are healthy and tasty, but not part of the average diet.

Jicama
Jicama, also known as a Mexican potato, is a big, heavy, brown fruit that really does look like a weird potato. The excellent thing about jicama is that it is very crisp and crunchy, but has a mild flavor like a cucumber. Jicama can be sliced and used with dips as an alternative to chips, eaten in sticks like any other crunchy veggie, or added to salads for a snappy texture without confusing the flavor profile. It’s a great summer side dish served with a spritz of lime juice and a dusting of chili powder if you’d like a little kick.

Bok Choy
In Asian cuisine, bok choy is a staple. For most of us, though, we’d never think to work bok choy into a dish, which is unfortunate because of how versatile and healthy this veggie is. Bok choy can be added to a salad, but it can also be eaten like you’d eat celery with a little hummus or nut butter. It can also be added to soups or stir-frys, or braised or grilled on its own, and given a little seasoning to become a brilliant side dish.

Pluots
Pluots are an incredible, juicy little snack that comes from mixing a plum with an apricot. They’re so good! Plums aren’t terribly uncommon, but not a lot of people are familiar with pluots. It’s a shame because they’re easy to carry in a lunch, they’re a little sweet with the benefits of both plums and apricots, and they’re another inexpensive fruit. They might be seasonal depending on where you live, but look for a fruit that’s a little smaller than a plum, and more yellow, in the plum area of your grocery store.

Rutabaga
Rutabaga is popular in some countries around the world, but it frequently gets forgotten in the US. With a little bit of a punch like a radish, rutabaga is an awesome root vegetable. If you like the spicy snap of it, it’s great to be eaten as a raw veggie. Others would enjoy rutabagas along with things like potatoes, parsnips, and squash in a cold-weather harvest stew.

Nopal/Cactus
A lot of people feel strange about eating cactus, but prickly pear cactus (also known as nopal) tastes great and is so good for you. It can have positive effects on blood sugar and managing diabetes, and it can help lower cholesterol. I suggest buying it cleaned already because the spines can be difficult to deal with if you’re new to the food, but many average grocery stores (and I imagine every Mexican or Hispanic market) carry cleaned nopal ready to cook. Similar in texture to something like a green pepper, nopal is great in dishes like scrambled tofu, or really anything sautéed. It tastes like other green veggies (think green peppers or green beans) with just a little lemony tartness. It goes really well with spicy dishes.

Dandelion Greens
The wonderful world of leafy greens leaves us with plenty of options at pretty much every grocery store, but dandelion greens aren’t something most people eat every day. The green leaves are great in salads and slaws, but they can also be boiled like spinach or sautéed and seasoned. They’re just a little bitter, but fun to try, and you can even forage for them if you’re really up for an adventure!

When people tell me that they don’t do plant-based eating because they don’t want to limit themselves, I have to laugh. People limit themselves and fall into a routine of eating the same things all the time. This is your wake-up call to use plant-based eating as a way to expand your diet and bring in fantastic fruits, vegetables, nuts, seeds, and beans that you otherwise never would have enjoyed.

About the Author: Vanessa Chamberlin is a Certified Holistic Health Practitioner and Lifestyle Coach and author of The Fire-Driven Life: How to Ignite the Fire of Self-Worth, Health, and Happiness with a Plant-Based Diet. For more information, please visit, www.vanessachamberlin.com and connect with her on Twitter, @vkchamberlin.