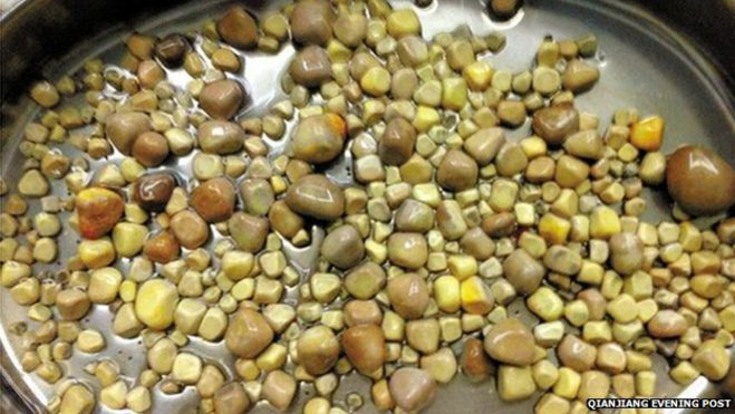 A 55-year-old man in China underwent close to three hours of surgery after a CT scan revealed his system was completely packed with kidney stones. The patient, identified only as Mr. He, had an astounding 420-plus kidney stones removed. Now, his doctor believes his tofu-rich diet is to blame.

The shocking discovery of hundred of kidney stones was made after Mr. He complained of terrible stomach pains. He was booked for an emergency operation because his condition left him unable to urinate, and doctors feared they would have to remove the kidney entirely if the stones weren’t removed immediately.

Kidney stones are caused by a buildup of calcium, which hardens in the kidney and prevents normal functions. In this case, Mr. He’s doctors believed that his daily intake of tofu caused the massive blockages.

According to Dr. Lindsey Mcilvena, a member of SuperFoods’ Medical Advisory Board, “Mr. He’s kidney stones were likely composed of calcium oxalate or calcium phosphate, as 80% of stones contain calcium. The role dietary calcium ingestion plays in stone formation is a little unclear, however. Diets low in calcium can actually cause stones. Typically, after someone has stones, their dietary oxalate is restricted, not their dietary calcium (from food). It’s much more likely that Mr. He’s lack of water intake is more a culprit than any excessive tofu intake. Dehydration is a known risk factor for developing kidney stones.”

This was not the first time Mr. He had a painful experience with kidney stones. About 20 years ago he was treated for more than 10 stones at one time—nowhere near the several hundred removed recently.

Mr. He’s doctor said he’d never seen anything like this recent case before. The two-hour and 45-minute procedure resulted in over 420 stones, all of varying sizes. What’s even more shocking is that the 420 stones didn’t include “the tiny rice-sized stones that were taken out using specialist suction equipment.”

Mr. He is reportedly recovering well, and his family has promised to restrict his diet to reduce the amount of tofu consumed on a regular basis. “Although it’s unclear what role the tofu actually played in Mr. He’s diet, eating a more moderate diet of soy is usually best,” according to Dr. Mcilvena, who suggests eating soy “3-4 times per week versus multiple times per day.”